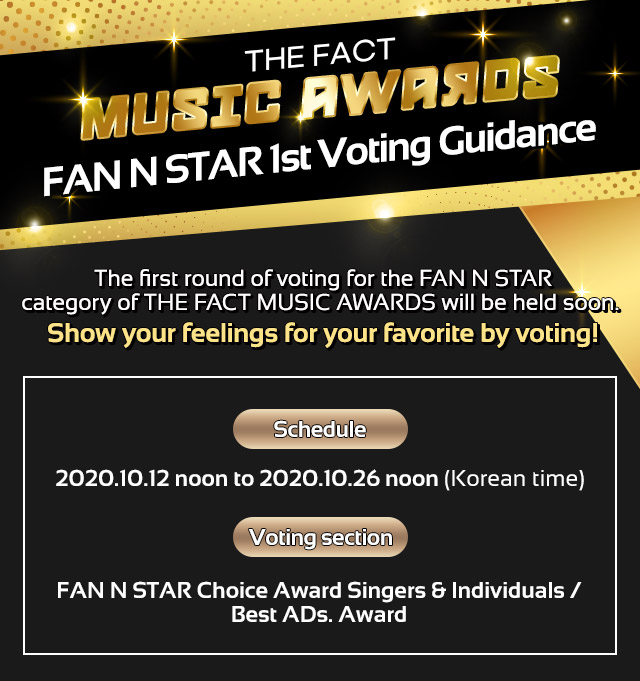 Voting in four categories, including the Best ADs. Award.

The first online vote for the third "The Fact Music Awards," which will be held on-tact, will finally begin.

The first online vote for the fan and star category of the 3rd 'The Fact Music Awards' will be held for two weeks from 12 p.m. on October 12 to noon on October 26, the organizing committee for The FACT MUSIC AWARDS said.

The first round of online voting has four categories: Best ADs. Award (best favorite award), FAN N STAR Choice Award – Singer, FAN N STAR Choice Award – Individual and Trot Popularity Award. Winners will be determined by the results of 100% online voting, and the "Best ADs. Award" will be determined only by the results of the first round of voting.

Details of the online voting can be found on the official fan and star applications and web pages. Major candidates in each category include Super Junior, BTS, Kang Daniel, Hwang Chi-yeol, Lim Young-woong and Young-tak.

The 3rd "The Fact Music Awards" will be held on-tack (Untact, meaning non-face-to-face, plus online connections) to prevent the further spread of Corona 19 and to ensure the health and safety of fans and artists.

The organizing committee has reviewed the method of holding the event from various angles to show high-quality performances that meet fans' expectations, and plans to make every effort to prepare for the event while thoroughly following the government's quarantine guidelines for a safe award ceremony without fear of infection.

The "The Fact Music Awards," which took its first step with a unique award ceremony with fans in April last year, received favorable reviews from music fans for its outstanding global artist lineup and their colorful stage as well as its colorful sets and high-quality video effects.

In February, the second "The Fact Music Awards" were scheduled to be held at Gocheok Sky Dome in Seoul on a grander scale, including the global boy band BTS, but it replaced all awards online in the aftermath of Corona 19.

Related information such as artist lineup, award details and screening criteria for the 3rd "The Fact Music Awards" will be released later on the newly renewed official website.