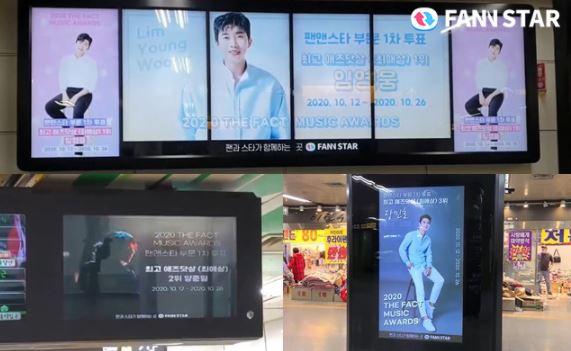 On the 13th, the '2020 The Fact Music Awards' FAN N STAR Favorite Artist Award (Best Asdot Award) video is being screened on the display board at Hongdae Station and 42 stations in Seoul Subway Line 2 and Hapjeong Station. /FAN N STAR

FAN N STAR, where fans and stars become one, released a special screening certification video of the top three groups in the FAN N STAR category of the "2020 The Fact Music Awards" (2020 THE FACT MUSIC AWARDS, TMA) on December 9th. The main characters of the special event are Lim Young-woong, Yang Joon-il and Jang Min-ho.

For two weeks from the 12th to the 26th of last month, "FAN N STAR" held its first online vote in a total of four categories: "Choice Award-Singer," "Choice Award-Individual," and "Trot Popularity Award," which selects 20 teams for the main voting.

Among them, the top prize winner will receive the TMA trophy and a two-week special video will be screened at the multi-vision at Hongdae Station. The 2nd and 3rd places will be given a one-week advertisement for the waiting room display at 42 stations on Subway Line 2 and the CM board at Hapjeong Station.