The second round of voting for 'The Fact Music Awards' begins…BTS, Lim Young-woong, etc. finalists... 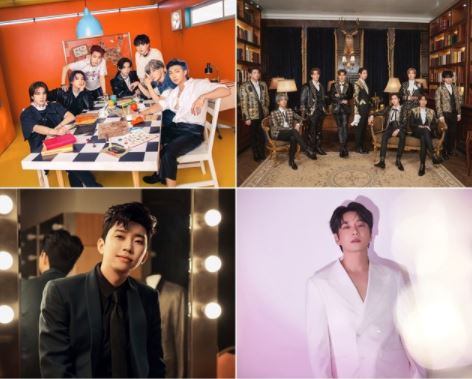 The organizing committee of the "THE FACT MUSIC AWARDS" said on September 6th that the second online voting of the 2021 The Fact Music Award will take place for three weeks from noon today ( noon) to noon on September 27th. The second round of online voting came in four categories: "Fan & Star Choice – Singer", "Fan & Star Choice – Individual", "Trot Popularity Award" and "U+Idol Live Popularity Award."

Among them, the winner of the "U+Idol Live Popularity Award" is determined only by the result of the second round of voting. With a total of 33 artists selected for the year, including BTS, Super Junior, Lim Young-woong, NCT DREAM, Seventeen, and ITZY, questions are growing about who's the most chosen artist by fans.

Voting for the "U+Idol Live Popularity Award" can be participated after logging in to the official website of "U+Idol Live" (Twitter, Facebook, Google account). Voting can be done once a day per account, and the artist with the most votes will be selected as the winner. 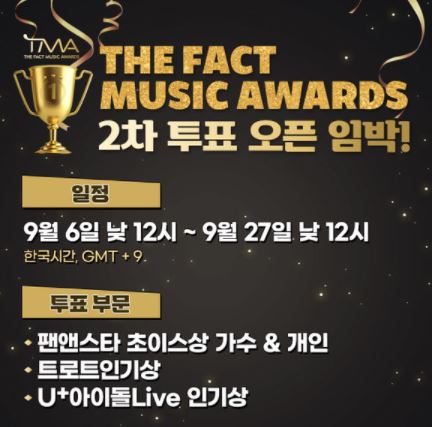 The 2021 The Fact Music Awards, a K-POP festival enjoyed by fans and artists, will be held on October 2nd to prevent the spread of coronavirus 19 and to ensure the safety of all the cast, staff, and fans.
Starting with BTS on September 6th, Korea's top artists, including Super Junior, Hwang Chi Yeul, SEVENTEEN, OH MY GIRL, ITZY, THE BOYZ, Stray Kids, ATEEZ, Astro, ENHYPEN, and STAY, have confirmed their attendance. It will attract K-pop fans around the world with a special stage that can only be seen at the 2021 The Fact Music Awards.
The 2021 The Fact Music Awards will be broadcast live for free online and broadcast from all over the world, including in Korea. Details such as how to watch will be released later.