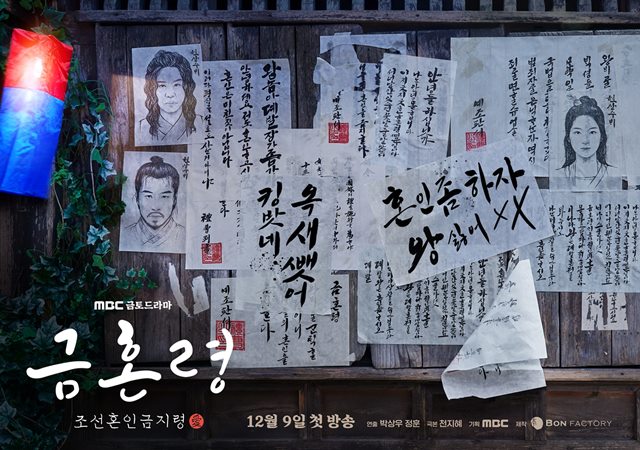 The production team of MBC's sixth-seventh new drama 'Golden Spirit, Joseon's Marriage Prompt' (played by Cheon Ji-hye, directed by Park Sang-woo and Jeong Hoon, hereinafter referred to as 'Golden Spirit'), which is scheduled to premiere on December 9, has released a teaser poster of the work set in a poster of the Joseon Dynasty on December 28. Information is disclosed.

"Golden Spirit" is based on a novel of the same name, and in the presence of King Wang (Kim Young-dae), who lost the Crown Prince 7 years ago and ordered a ban on marriage, So-rang (Park Joo-hyun), a marriage fraudster, appears in front of King Lee-heon (Kim Young-dae).

Park Joo-hyeon takes on the role of So-rang, a trickster who lives by the eye. Kim Young-dae takes on the role of King Lee-heon, who lost the Crown Prince 7 years ago and is in a state of frustration, who has ordered a ban on marriage, and Kim Woo-seok is Lee Shin-won, a master of Uigeumbu with warm looks and great martial arts skills. Interest boils down to the story of the three meeting in the palace and becoming confused.

In the teaser poster launched, content is added in the form of graffiti of those who oppose the golden spirit on the room of the attention-grabbing golden spirit. With modern phrases like 'Take the royal seal' and 'Take each other, I don't like princess XX', I expected a film that broke the framework of existing period drama.

In addition, the teaser poster seems to show the 7-year period of the golden spirit, slandering the main culprit of the golden spirit or urging them to get married, there is a blue lantern on one side. situations where a person gets married secretly. That shows that love can't stop.

The production team of 'Golden Spirit' said, "We wanted to show a different side than previous period films. So-rang, who hangs as a wanted criminal on the teaser poster, Deok-hoon (Lee Jung-hyun), Wang-bae (Kim Min-seok), and Jeong Do-seok (Hong Si-young) of 'Moseoldan'. Please pay attention to his appearance. "He said, 'Moseoldan' is doing a great job of making interesting plays. Let's wait and see what he looks like in 'Golden Spirit'. "