TXT tops the Fourstar chart for 3 consecutive weeks of 'Fannstar' 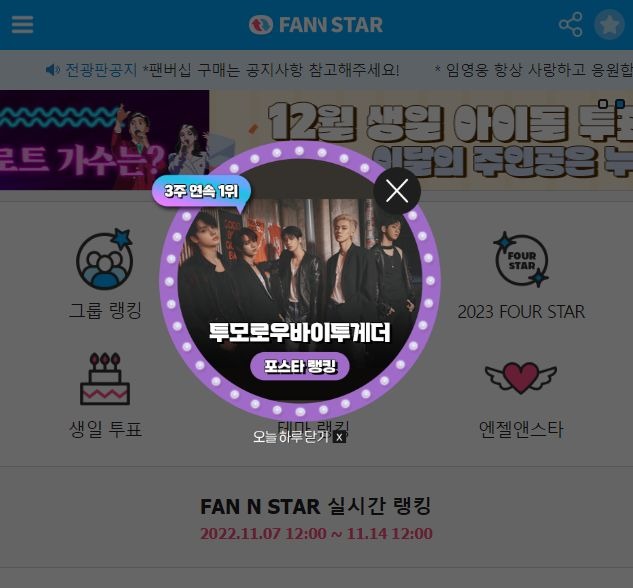 Photo: Fan N Star
Group TXT has occupied the No.1 for 3 consecutive weeks on the Instagram chart of Fannstar - the weekly idol ranking site.
TXT climbed to No.1 with 3,211,160 votes in the first week of November 2023 of Fan N Star which took place from October 31 to November 7. Stray Kids is second with 199,7543 votes and ATEEZ is third with 1,354,777 votes.
The Fourstar Ranking 2023 is a poll to vote for the most influential idols for fourth-generation idols. Fan N Star will show a video congratulating the artist on winning the Fourstar chart for 10 consecutive weeks at N Square, Hongdae station, Mapo district, Seoul. In addition, if they topped the chart for 30 consecutive weeks, they will conduct a rap advertisement on the wall of Hongdae Station and announce this news at the Lotte World Mall Jamsil chandelier, which has topped the chart for 50 consecutive weeks. If they topped the 26w Hong Kong billboard, the Paris France billboard, and the 100-week billboard in a row, they'll be congratulated through the Goyang Starfield Media Tower billboard.