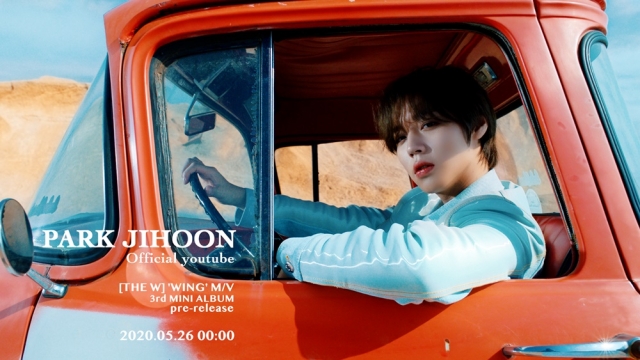 Singer Park Ji-hoon will pre-release the music video for his title song before releasing a new mini album.

"Park Ji-hoon will pre-release the music video of the title song 'Wing' on his official SNS and YouTube channel at midnight on the same day before the release of his third mini-album 'The W' at 6 p.m. on the 25th," his agency Maroo Entertainment said.

The music video for "Wing" was directed by Yoo Seong-kyun, director of Sunny Visual, who worked with a number of talented artists such as B1A4, NU'EST, MONSTA X, Oh My Girl, and National STEN, and is expected to meet with director Yoo Seong-kyun, who is famous for his sensuous video production, and Park Ji-hoon, who has excellent acting skills.

The new album's title track "Wing" is a song featuring fast EDM and addictive Mumbaiton sound, which will give another glimpse of Park's charm. In addition, he is expected to show his ambition as an artist who flies toward his dream with a more mature look by focusing on perfection throughout the album.

Park Ji-hoon's third mini-album "The W" will be released on various online music sites at 6 p.m. on the 26th.

Meanwhile, Park Ji-hoon will hold an online fan showcase on his official V LIVE channel from 8 p.m. on the 26th, right after the album's release, and will unveil his new song to fans for the first time.