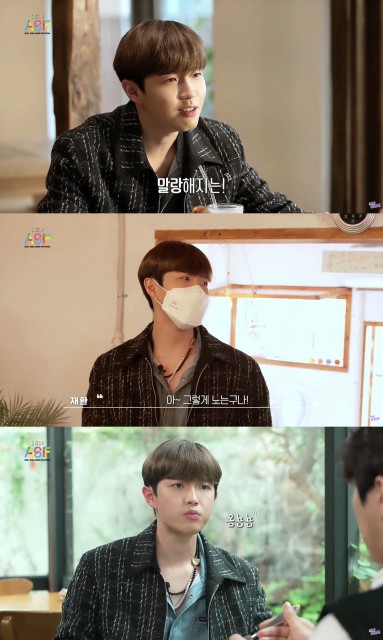 Kim Jae-hwan appeared with B1A4 Sandeul to introduce Hwangridan-gil, Gyeongju, in the 2021 ASF Gyeongju Busking video released on the official YouTube channel of the Asia Song Festival on October 7th.

In the previously released video of Kim Jae-hwan visited Bulguksa Station in Gyeongju and performed a busking live stage with tvN drama Crash Landing on You OST "One Day." He visited another attraction in Gyeongju called Hwangridan-gil this time.

The warm chemistry with Sandeul also caught my attention. Kim Jae-hwan and Sandeul exchanged acrostic poems and performed a situational play, saying, "I rented this cafe for you," drawing laughter with their fantastic tiki-taka.

Above all, Kim Jae-hwan and Sandeul's "For You" duet live on the spot gave ear candy. Kim Jae-hwan showed off his unbelievable singing ability and sensibility despite the sudden song.