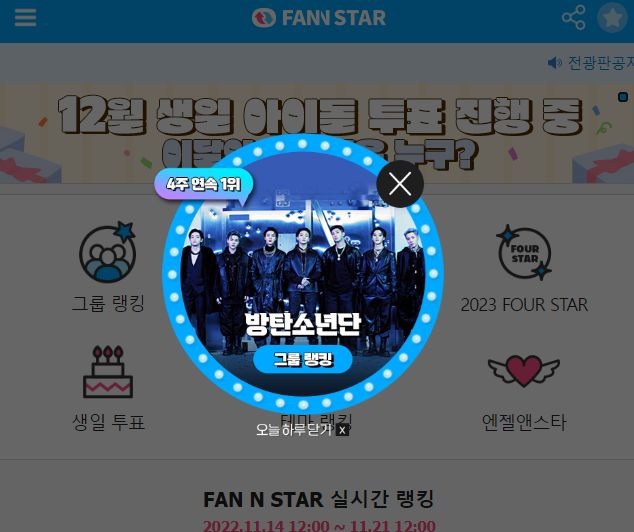 Photo: Fannstar
Group BTS has occupied the No.1 for 4 consecutive weeks on the Fannstar group chart - a weekly idol ranking site.
BTS climbed to No.1 with 18,689,213 votes in the second week of November for Fan N Star taking place from 7~14. Next, Super Junior took 2nd place with 685,532 votes, and Astro ranked 3rd with 359,681 votes.
Fannstar will show a video congratulating the artists who won on the group chart for 10 consecutive weeks at the N Square billboard at Hongdae Station, Mapo District, Seoul. In addition, if they topped the chart for 30 consecutive weeks, they will conduct a rap advertisement on the Hongdae station wall and announce this news at the Lotte World Mall Jamsil chandelier, which has topped the chart for 50 consecutive weeks. . If you topped the 26w Hong Kong billboard, the Paris France billboard, and the 100-week billboard in a row, you'll be congratulated through the Goyang Starfield Media Tower billboard.